The Heartlake Hair Salon (41093) was one of the Friends sets released in January 2015.  It’s a fantastic looking set and packed with details, but how does it stack up as a modular building? 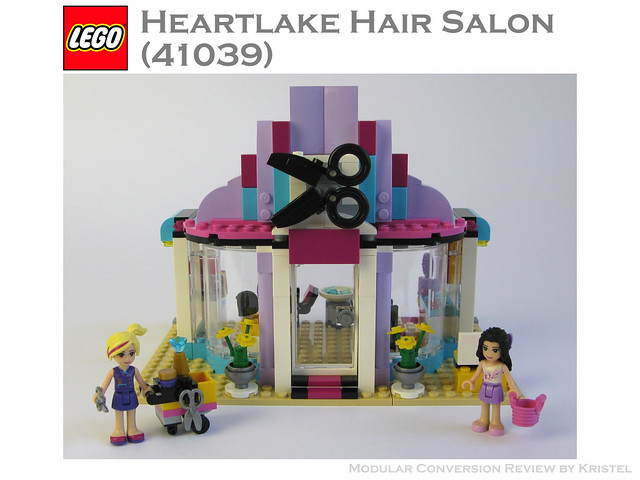 A big thank you to TLG’s Community Support team for providing the set for this review!

The box art on the front and the back follows the traditional design of the Friends theme, and lets us know that the two minifigures included in this set are Emma and Natasha, and what the main play features are: 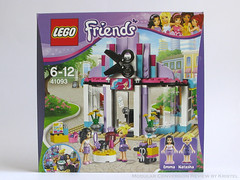 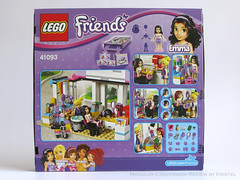 Inside the box are three parts bags, a couple of large Tan plates, the instructions booklet and a small sticker sheet: 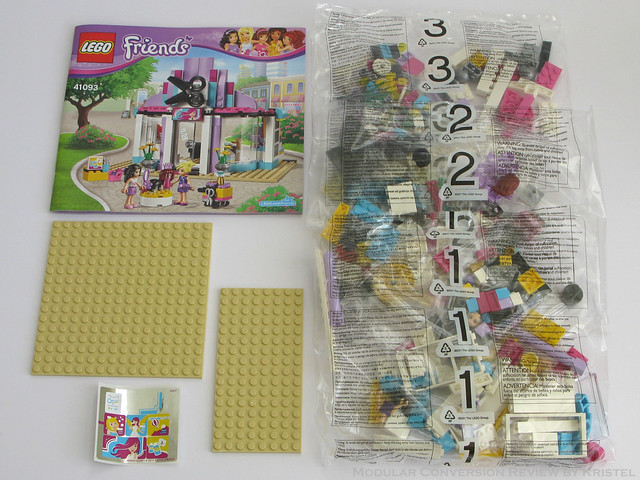 Let’s have a closer look at the parts inside the three bags: 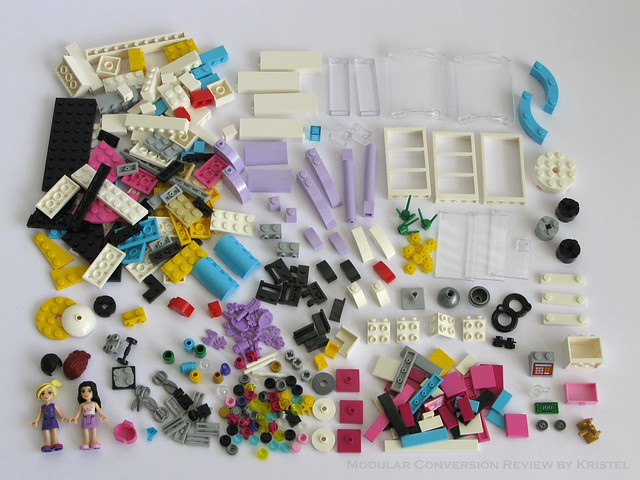 Here are the things that caught my eye:

Here is the set, built according to the set instructions: 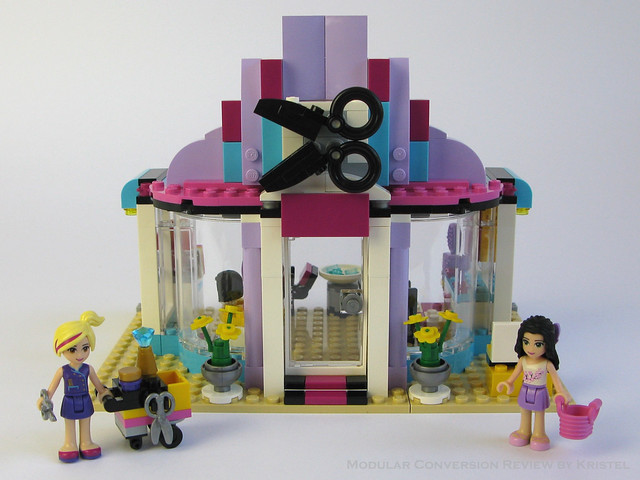 The top part of this little building and its colours gives it a bit of an art deco feel.  The scissors are deceptively simple in how they are built, but looks fantastic!

Consistent with the Friends theme generally, the interior is fully furnished.  I particularly like the design of the wash basin and the coffee machine.   I question the wisdom of leaving the money unattended on the top of the cash register! 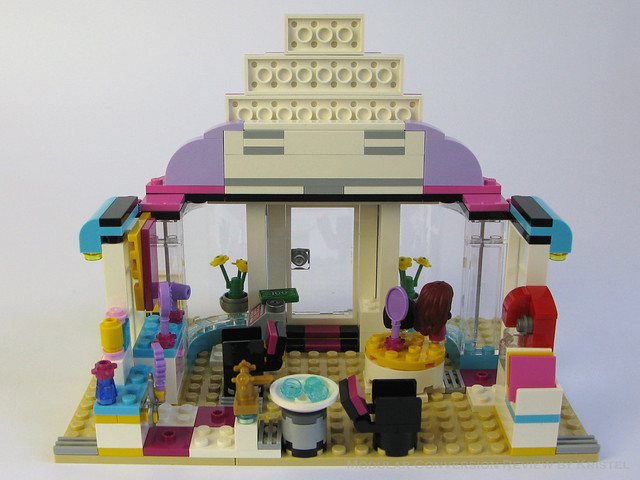 Here’s another angle that shows the retro coffee machine a little better: 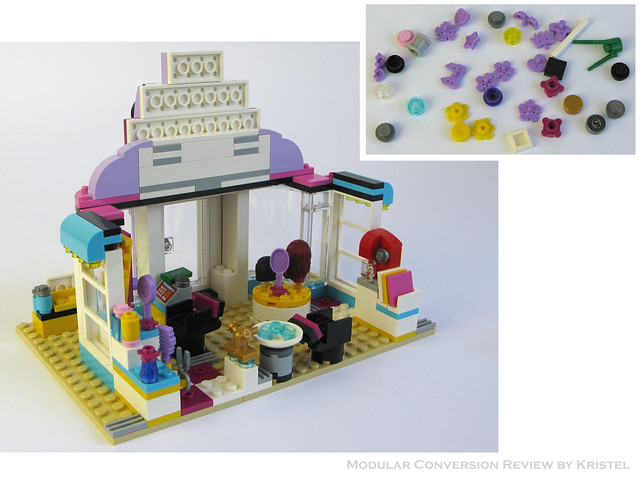 The inset shows the spares parts, which are dominated by the accessories.  Unlike the Friends’ Butterfly Beauty Shop (3187), the Heartlake Hair Salon doesn’t have a place to store the excess hair accessories.

This brings us to the modular conversion part of the review.  The first thing I did was see how far I could get using only the parts in the set.  The exception to this was the 1×2 technic bricks with holes, since they need to go right at the bottom of the building!

Here is how far I got: 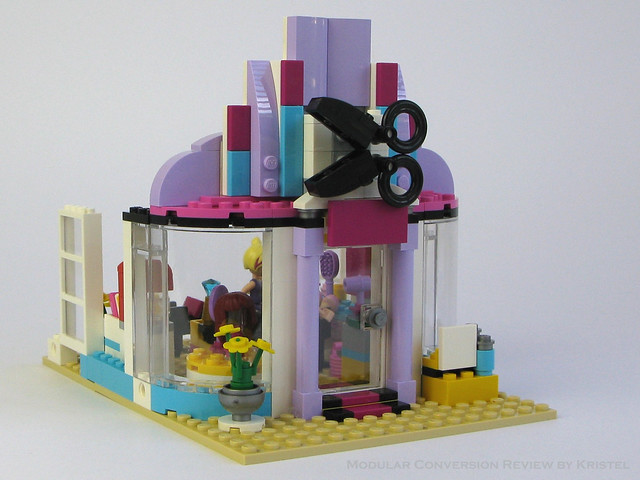 I choose to set the door back one stud as it was sitting quite a way forward relative to where the front of a 16×32 baseplate would sit.  I had to bring in the curved plates one stud on each side, but otherwise the art deco feature and the scissors sign did not need to change to fit the modular standard. 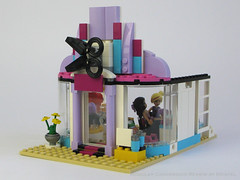 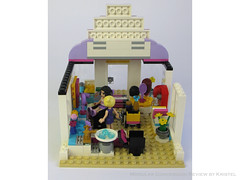 The sides of the building were brought in line with the curved windows and I used the available white bricks to create a wall behind the main mirror feature.  It seems wrong to hide the window behind the mirror – kind of defeats the purpose of having a window.

Unfortunately, there weren’t enough bricks to complete the side walls in this configuration.

Here is where I ended up after adding parts from my own collection: 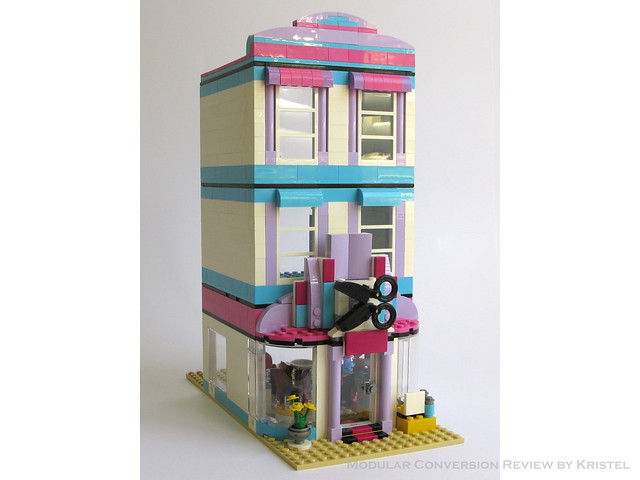 I was going to build a roof similar to the art deco feature above the shop entrance, but this ended up being somewhat overwhelming.  Having two such features was too much and so I reverted to something much simpler for the roof.

The Lavender bricks next to the first floor windows should be replaced by columns (as per the second floor (I just didn’t have enough on hand).

To avoid having much of the first floor hidden behind the art deco feature, I added a couple of rows of bricks in Dark Pink to the ground floor.  I love the vibrancy of these colours, although I did spend the whole day thinking about getting my hands on some liquorice all sorts! 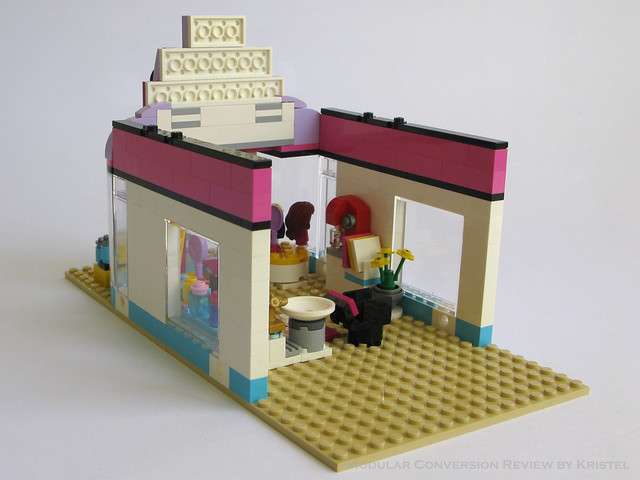 I also used panel windows on the lower floor instead of the window frames that came with the set, so that I could save these for one of the upper floors.  While is it is not normal to have windows on the sides of modular buildings, I like to do so for the Friends modulars to brighten it up for playability.  I generally leave the back open for the same reason. 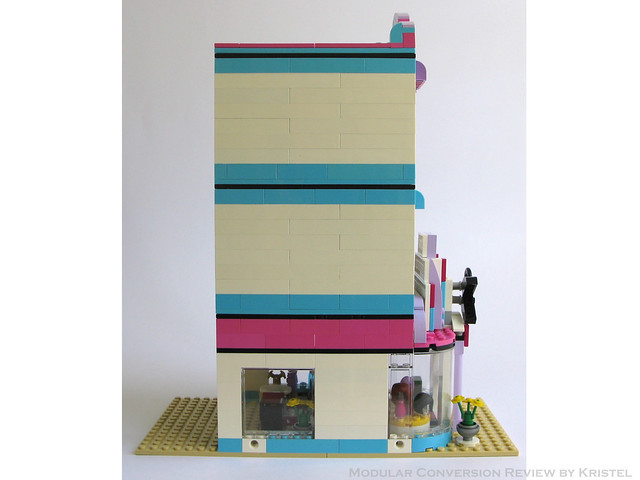 And a last closeup of the main part of the building to finish up: 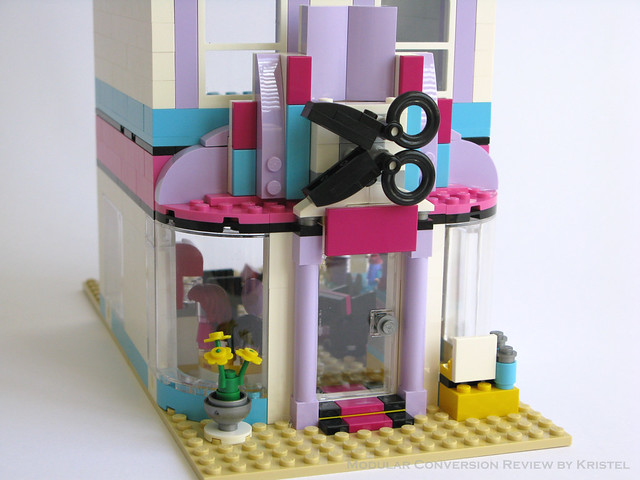 I’m calling this building “Natasha’s Place”.  While Emma is the main Friends character in this set, I have previously built a modular for her, Emma’s Place, based on the Butterfly Beauty Shop (3187).  Anyone else get a feeling that Emma is spending too much time at the salons?

If you made it all the way down here, I thank you for your perseverance and I hope you enjoyed the review!  I would also love to hear what you think of this review format.

You can download the instructions for Natasha’s Place here.

*If you would like a review of the official build itself and the minifigures, Laure has done a great set review for Friends Bricks, which can be found on Heartlake Times.