With the Kahuka Koffee, Andrew Tate (aka snaillad) proves once again that he is a master of the large buildings.  The Kahuka Koffee is six storeys (including the roof) and is named after the cafe located on the ground floor.

I love the variation in the facade of this modular building, with the different windows not just up one side / edge of the building, but across both sides.  This is something I always struggle with in my own buildings.  In most instances, I end up having the windows framed the same way on each level.

The upper half (white floors and roof) is my favourite part of this building. I particularly like the:

The other things that caught my eye were the lamp post and the reddish brown double doors on the right hand side of the building.  It looks like those doors are brick-built, with the arches sideways to create the semi-circle effects.

The interior of the Kahuka Koffee is also really well done.  I like how the display cabinet and open drinks fridge have been done and the use of the different types of seating.  The black couches are my favourites, and look like a nice place to enjoy a long black.

Thanks for the inspiration, Andrew!  Head over to his Flickr album to see the Kahuka Koffee in high resolution glory.

Snaillad (Andrew Tate) has again shown us his exceptional design skills with the headquarters for the Astrid and Associates Architecture firm. The 1930’s building has been renovated inside and out to showcase the architectural firm’s skills.  Judging by the results, I expect they will have plenty of new clients to keep them busy!

My favourite detail on the outside is the way that the ground floor windows on the left have been framed by the arches, followed by the tall window above the entrance.  The interior features a modern decor, with a funky meeting table and clever storage for all the architectural drawings.

Head over to the Flickr album for more shots of this beautiful building.

Thanks for the inspiration, Snaillad!

The United States Capital Building (21030) is one of the larger Architecture sets, so I thought I would see how it would stack up as a parts pack for a modular building.

Barrie Crossan’s latest MOC, a corner modular building housing a bar and family apartment, has a striking facade and is packed from top to bottom with beautiful details.

As always, Barrie has also paid attention to the presentation of the building.  My favourite shot is this close up of the ground floor.  It highlights the character of the building and the nice parts usage (NPU), such as the microphones as the top of the bollards.  The “Captain’s Daughter” flag (from the London Escape (4193) set) is perfect for this building.

The bar and apartment are both fully furnished, and definitely deserve a closer look.  My favourite details are the chandelier and the wood panel wall behind the fireplace in the bar, the laundry and the main bed.

Head over to Flickr for lots more images of this beautiful modular building.  Thanks for the inspiration Barrie!

With its bold black and white facade, Palixa and The Bricks’ latest modular creation, Book Shop, is one of those striking modular buildings that immediate captures your attention.  And then you take a look inside and there are even more beautiful details to drool over.

Purple is my favourite colour, so it’s no surprise that the bedroom is my favourite room in this building.  The use of a tub and studio approach to the bathroom is a clever use of the small space. I also love how Palixa has incorporated the storage into the back wall. 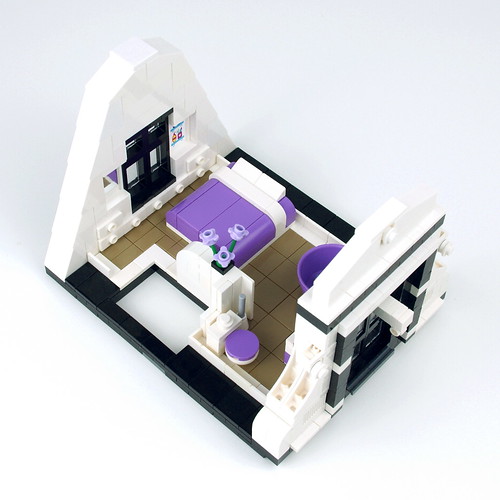 Head over to to the Flickr album to see all the gorgeous details!

While it is technically not a modular, it was just too sweet not to showcase.

Duncan Adkins has been working a little on perfecting his Modular Police Station.  I’d say he’s pretty much there as I can’t fault this beautiful building.

I’m looking for to seeing the one in real bricks one day!  In the meantime, check out the other image of this stunning building in the Flickr album.

I fell in love with the Brick Bank (10251) when LEGO released the high resolution images back in October.

And it doesn’t disappoint in real life.  Find out why here!

The Antique Shop & Art gallery by Olímpio Albano has a striking facade, but it’s the interior where the really beauty lies.  The three story, fully furnished building houses an antique store downstairs, an art gallery on the middle floor and an art studio on the top floor.

My favourite floor is the art gallery … I wonder if that is the original brick separator on display, or one of the billion clones?

The Bäckerei Schrippenkneter by FiliusRucilo is one of those striking modular buildings that grabs your attention immediately, but it is not until you look a little closer that you appreciate it for all the details.

I particularly like the tile facade, window sills, and the inline windows in the roof, which itself is a feature.  I also quite like the clocks and the planter box.

The Bäckerei Schrippenkneter is fully furnished with the bakery shop on the ground floor, bakery kitchen on the first floor and a studio apartment on the top floor.

Head over to the Flickr album for more image of the interior and exterior of this gorgeous building.  Make sure you check out the clever industrial dough mixer!

Hi! I'm Kristel, and I'm a AFOL who was inspired to try her hand at MOCs by all the amazing modular buildings others have created using LEGO